February 20, 2022
There are a few features that make the garden quite unique, and are therefore worth a mention.
We are located less than a mile from the sea at Mount's Bay (Bay an Garrek in Cornish), the largest bay in Cornwall, a large sweeping bay stretching from the Lizard Point to Gwennap Head. The north of the bay is the fairy-tale castle emerging from the water, St Michael's Mount. 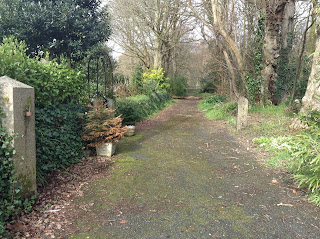 Our property was the gardener's lodge, situated at the gates marking the start of a long drive leading to the grade II listed Georgian Manor House, built on the site of a castle constructed in the 12th century.
The long, sweeping drive is bordered by the obligatory mature trees.  However, due to the building of a bypass, which transected said sweeping drive, it is now a lane going nowhere. This is rather nice for us because we have unused woodland outside our gates instead of, what would have been, back in the day, a busy drive.  Our pedestrian gate can be seen to the left, under a black arch.

A stream runs through the garden.  It is actually a river, but on a modest scale, so we refer to it as a stream.  This runs parallel to the front boundary and cuts right across the garden.  It therefore creates separate garden areas each side of the foot bridge to the front door.

The Lodge is situated slap bang in the centre of the half acre grounds, thereby creating other natural divisions to the garden.

Our position in the far South West of Cornwall, with its unique micro climate, allows us to grow palms and succulents.  Our winters are usually so mild, that we do not have to lift or protect plants for the winter. 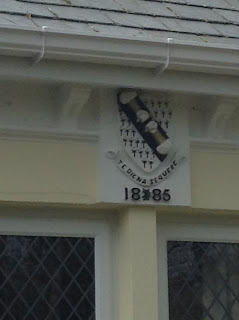 Lastly, we completely annihilated a mature garden.  The Lodge was very small.  Originally it consisted of only two rooms.  There had been an extension previously, that doubled its size, but we intended to double its size again.  The plot was on a considerable slope, so to extend back, masses of earth had to be removed.  While they were at it, we asked the builders to put in a retaining wall, and level the west side of the garden, removing yet more earth and destroying the garden in the process.  It had become very overgrown and neglected, but there was a forest of camellias, and one of rhododendron, which was hard to see destroyed, but the Lodge had begun to remind me of Sleeping Beauty's castle!  I did take several cuttings, however.

Popular posts from this blog 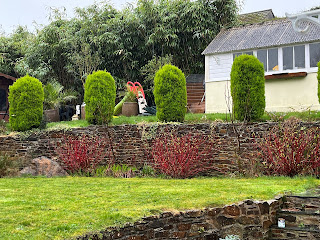 The East side of the garden, showing the top retaining wall.  You might spot the top of a huge rock protruding from the ground.  This was uncovered when the ground was being levelled, and it being too big to move, was kept as a feature.  Cornwall experiences quite a lot of rainfall, especially January/February/March time, and the area directly in front of the retaining wall sometimes looks like a garden pond!   This picture shows the wall and the top of the rock.  It also shows the palm - more about that below. The dogwoods were planted some 5 years ago, and seem to have no problem with their 'feet' being in soggy ground for a large part of the year.  They are very happy, and I have to cut them back each year to stop them growing too tall and obscuring the colourful plants that will be planted on top of the wall, between the row of conifers. The variety is Alba 'Sibirica' and these plants with their eye-catching stems, provide winter colour.  It is said that they should
Read more 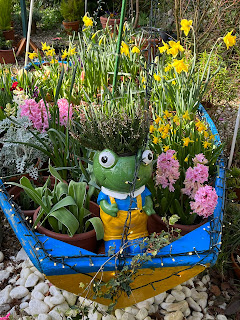 A good friend, who belongs to a local yacht club, found us this disused boat.   It is positioned next to the river that runs through the garden.  We painted it and try to keep it brim full of seasonal flowers all year round.  At Christmas we decorated it with lights and created 'sails' from the stands of lights.  It looks so nice at night, that we decided to keep them, so it is lit up all year round. Really pleased with the daffodils and hyacinths this year.  The frog, with his heather 'hair' is at the helm.
Read more